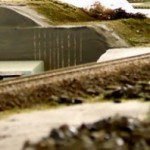 Ever since the raffle layout winner was announced at the ExTRAINaganza, several club members have been busy creating the next layout. Tom Coulombe, Jerry Johnston, and Travis Johnson have finished building the base, creating a track plan, laying the track, and painting the layout. Nick Matluk has been ballasting the track, and Terry King has been painting and restoring buildings to be used on the layout.
The raffle layout will be used at several club events this year and is frequently the center of attention at non-club affairs. It will be exhibited for the first time on January 18 at an event sponsored by the Court Street Baptist Church in Auburn. As the year goes along, we may be asked to use it at schools, libraries, nursing homes, veterans’ homes, and “Old Home Days” at various towns. With the use of the raffle layout at these special events, our club gets a lot of exposure and opportunities for distributing handouts promoting our other club activities.

Permanent link to this article: http://www.greatfallsmodelrrclub.org/news/2013-raffle-layout-being-built/