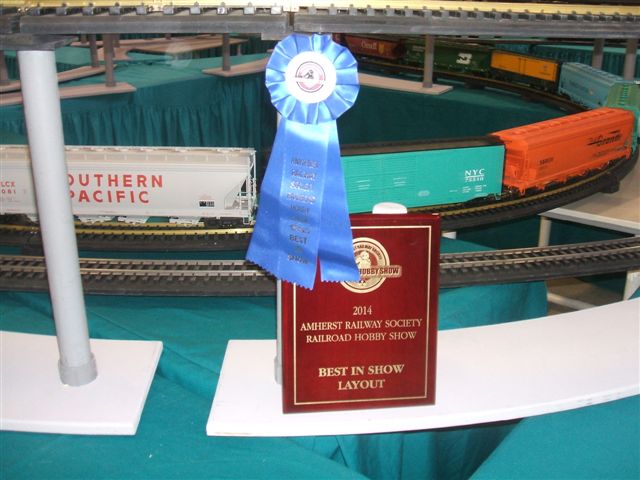 THE GREAT FALLS MODEL RAILROAD CLUB was honored recently as recipient of the Amherst Railway Society’s 2014 Best in Show award. The award was given in recognition of the Club’s vast and innovative exhibit of G-Gauge trains at this year’s Railroad Hobby Show in West Springfield, Massachusetts. The Club’s 2,000 square-foot layout featured multiple full-length trains running on three different levels, and on eight separate circuits over a combined 1,000 feet of track. As a large and appreciative audience looked on, the trains covered some 2,700 miles over the course of two days at a 1:29 scale speed of 20 mph–the distance from Boston to San Francisco.

The Amherst Railway Society’s annual train show has grown to become the largest of its kind in the Northeast. This year’s show, held on January 25th and 26th, attracted more than 25,000 visitors, vendors, and exhibitors. Competition for exhibit space can be tough. More than 260 applicants were turned away this year because space was unavailable. The Great Falls exhibit was accepted on the strength of the popular “double helix” train display that the Club displayed at last year’s train show.

This year’s prize-winning exhibit was conceived by the creators of the double helix, Dick Rubin and Ralph Luby. Their goal was to bring excitement to the viewer by displaying numerous trains constant motion, each train looping over, under or beside each other, all of them visible from a myriad of vantage points. The components of the display were built and tested over the summer and fall of 2013. The roadbed alone took 20 sheets of plywood, which had to be fabricated, routed, and painted. Dozens of portable supports were built to raise the tracks to different heights.

Because of the size of the display, there was no way to run a dress rehearsal. Each part had to fit precisely once it got to West Springfield. Thanks to Ralph’s meticulous design and planning, each part worked perfectly. 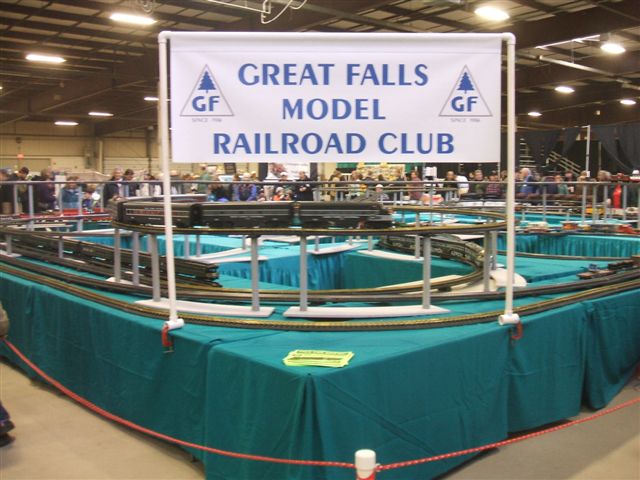 Getting to West Springfield

Moving the display from Maine to Massachusetts was no mean feat. The exhibit materials weighed over 4,000 pounds. A combination of trucks, trailers, dollies, SUV’s and cars was required to move them. Moving the materials also took the help of several volunteers. The Great Falls Model Railroad Club is well-known for the willingness of its members to pitch in when projects call for help. The Amherst display was no exception. Six members of the Club helped to transport the display to Massachusetts, including Peter Amershadian, Tom Coulombe, Scott Gould, Jerry Johnston, Ralph Luby, and Dick Rubin. They were treated to a French toast breakfast at the home of Dick and Denny Rubin to get them on their way. (Denny also prepared enough sandwiches to feed the whole crew for two days.) Once in West Springfield, this “G Man Team 2014” was joined by Ray Parent, Ken Nettleship, and a team of GGauge modelers from Michigan–Dick Serreyn, Rick Brietzman, and Greg Franco. Club members Ed and Brenda Leslie pitched in later to help take down the display.

Erecting the display took the better part of two full days. Fifty-four tables were required, including 8 custom made by Ralph. The Auburn Mall graciously provided table covers, which helped to visually unite the display. Tracks were assembled with split-jaw clamps, essential for electrical conductivity and physical integrity, but a tedious job to assemble in the near freezing exhibit hall interior. Access to the interior of the layout was also tricky for G Team members whose backs and knees are creaky. Peter Amershadian, ever nimble, saved the day. 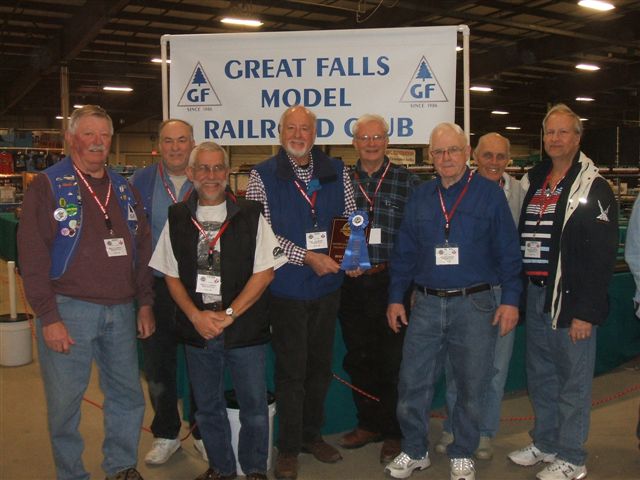 Once the exhibit was up and running, members of the team ran 18 different engines, and more than 90 cars. Long trains of more than 20 cars were possible because curves on the display were broad. Engines varied from a New York Central Hudson to a magnificent ABBA set of Alco PA’s, and from a Pennsylvania GG1 to Southern Pacific’s No. 4449, a 4-8-4 made famous by pulling the 1976 American Freedom Train. Ray Parent ran a 14-car model of this train, complete with custom cars he had built himself. Ray also ran his scratchbuilt model of the Schnabel car, the longest rail car in the world, at 343 feet when loaded. Ray’s 32-axle version stretched 104″, or 278′ in 1:32 scale, with the capability of expansion to 311.’ Together with three vendor flatcars, his American Freedom Train totaled 568″ in length, or fully 1500 scale feet. (GARDEN RAILWAYS MAGAZINE will have published two articles on Ray’s fine models.) Still photos don’t do justice to the layout. But Ray Parent has assembled a DVD of the layout from several sources, including a number of videos he took himself. He plans to show these at a future Great Falls meeting.

When the train show ended, Club members had only four hours to take down what had taken two days to assemble. They managed to pack the entire layout with a half-hour to spare. Once back in York, the remaining crew of five packed the display away, ready for another year.

Congratulations to Dick Rubin and Ralph Luby for making the 2014 Great Falls train display a reality, and to the members and friends of the Great Falls Model Railroad Club for their generous time and talent in making the display such a wonderful success. The G Team was truly best in show.

To see more photos of the display, VISIT THE GALLERY

To see the original Special Edition ‘The Signal’ newsletter, VISIT THE SIGNAL ARCHIVES

Permanent link to this article: http://www.greatfallsmodelrrclub.org/news/best-in-show-west-springfield-train-show-2014/